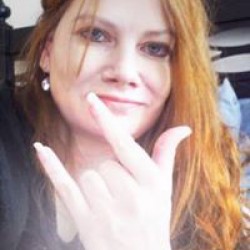 Music is my passion. I write, read, and breath rock stars

Set in a hurricane-aftermath New Orleans (although Alys is keen to emphasis this is not based on Katrina) Adele Le Moyne is on her way home following a mandatory evacuation when the storms hit, having spent the past two months in Paris with her difficult, distant mother and she's not quite sure what she's going back to.

Adele and her father move back into their storm-battered family home and set about trying to get the house into some kind of order and re-establish their lives in a devastated city, where dangers seem to lurk dangerously in the shadows. Since the storm, crime within the city has increased and the death rate is steadily increasing as bodies start turning up - deaths that might not have been results of the hurricane and in fact, caused by something even more sinister than the evil storm.

Soon, Adele learns that these mysterious deaths are not the only strange things happening when odd, supernatural events start occurring around her in particular; which lead her to discover that she is part of something much bigger than the storm and its something that started with one of her ancestors Adeline, back in 18th century Paris.

With vivid historical flashbacks via Adeline's diary letters to her father, Alys successfully weaves an intoxicating mix of old with new, and gives the reader a stunning backdrop to understanding just who Adele is and why she is suddenly caught up in this edge-of-your-seat mystery of witchcraft, vampires and shape-shifters.

Being a Brit, I'm always a little bit in love with any novel set in a place where it's highly likely I will never go and when novels are set in New Orleans, it's fair to say I'm reeled in rather easily - which is why TCG reminded me a little of Anne Rice's The Vampire Chronicles as it took me back to a world I hadn't read about since I'd dallied with Lestat and Louis. What's even more alluring about TCG is that Alys is a master at painting beautiful pictures with her words; her descriptive abilities are second to none and despite never having visited New Orleans in my life, I almost felt I had seen it for myself, so detailed is Alys' depiction of the city.

With so many vibrant and mysterious characters pouring out of every page, you will have a hard job working out which one you love the most and lets not even get on to the battle between Isaac and Nicco; a reader discussion which still continues to cause quite a stir on Wattpad!

Five out of five Alys!